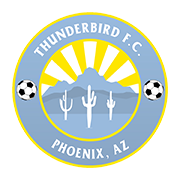 Ben Epstein is the Head Coach for Thunderbird FC’s U9 Boys Team. Ben holds his US Soccer D License and is SafeSport certified.

Ben grew up in Phoenix, AZ and played his youth soccer for Valparaiso Futbol Club. He played high school soccer at Brophy College Preparatory where he won the State tournament his senior year in 2013. Having studied Finance at Santa Clara University, Ben was a sports writer for the school’s newspaper, with one of his most popular pieces revolving around the United States Men’s National Team where he interviewed Seattle Sounders star Jordan Morris.

Ben has been coaching for Thunderbird FC for three seasons.